Review of ‘Last of the Red Hot Lovers’
JC Paquet is ‘brilliant’ as Barney!

By Rod Urquhart (As appeared in The Newmarket Era)
JC Paquet, fresh off the stage from Ace Galaksi – Space Dick at Large in October, is back with a simply brilliant performance in ‘Last of the Red Hot Lovers’, now on Stage 426 at the Royal Canadian Legion.

If that isn’t enough, the flamboyant JC is joined by three seasoned veterans of community theatre in this raucous production of the Neil Simon Classic, and a guaranteed top-notch performance unheard of today in community theatre!

A tip of the hat goes to director Teri Hallatt, who skillfully managed to get the cast to actually do some really nifty acting – as opposed to just ‘walking through their part’ – to give the audience more than one or two, or even a dozen, laughs – this is a rib-tickler!

JC Paquet is Barney, a 47-year-old who ponders the idea of having an affair after more than a quarter century of marriage to his faithful wife. So he invites three women, all separately of course, to his mother’s apartment for some extra-curricular activity.

But Barney is new to this sort of fling and the women he invites in this play set in the late ‘60s at the end of the sexual revolution, are all so completely different, the perplexed Barney has his definite troubles cohorting with these women!

First up on stage is Laurie Williams as Elaine, who did a wonderful job as Gus in ‘Cookin’ With Gus’ last year with the Newmarket Stage Company, as the over-eager sex-craved married woman. Of course, Barney is new at this sort of thing, so it simply leads to hilarity.

Then in the second Act, next up is Cheidre Kyle Mackey, as Bobbi. She really does a great job as a space cadet wanna-be actress and night club singer with little more than air bubbles in her head. This sets the tone of the second Act, as Barney and her get into a strange, but very funny, dialogue.

Finally, it’s his long-time friend Erin Wrightson, as Jeannette, who wonders out loud about the morals of society and the right and wrong of having an affair. All three of these women are perfectly cast, as is JC, that you actually believe what they are putting on stage — again, my hat off to director Teri Hallatt for all her hard work.

With the limitations of Stage 426 at the Newmarket Legion, it’s really a wonder the Newmarket Stage Company and set designers Peter Salt and Victor Pierrynowski could come up with such a ‘perfect’ set for this hilarity to take place. Kudos to these two.

Lighting and sound were on cue all night, so a tip of the cap to Sara and Nicole Hayward, and lighting designer Mark Hayward, spot-on costumes for the late 1960s by Fran Wachna and hair by the multi-talented Laurie Williams. Co-produced with enthusiasm by Diane Ament and Sue Meacock, by special arrangement with Samuel French.

As an aside, auditions will soon be held by the ambitious Newmarket Stage Company’s production of Norm Foster’s ‘The Ladies Foursome’, which will run next April and May. Four women are needed for this production – if you are interested, call 905-895-2075.

Rod Urquhart is author of two humour books – ‘Talk Turkey With Urqey’ and ‘Tales for the Outhouse’ and also a poetry book, entitled ‘Life Lines’. All three are available at the Georgina Art Centre & Gallery and Turn The Page Bookstore, both in Sutton. 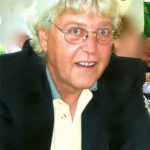